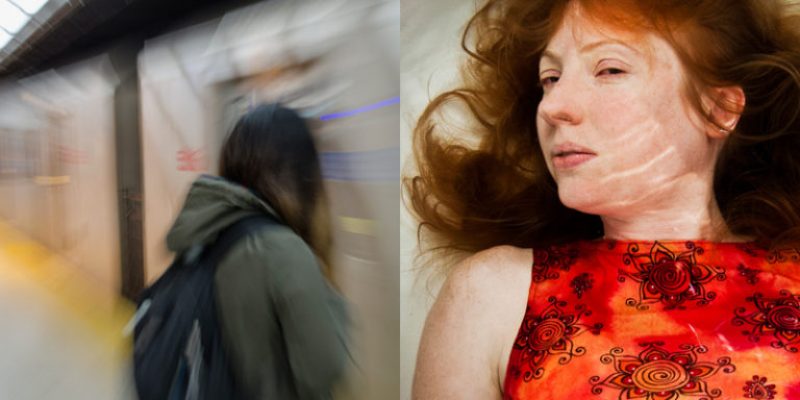 The idea for this project came from a reoccurring dream of being underwater and not being able to speak or see clearly, I would watch the world through a watery haze surviving alone and without the ability to connect or communicate.

I equate water with struggle, calming, heaviness, fear, sensuality, the unknown and tried to evoke this through the images.

Not everyone seems okay.

Initially I photographed people I knew and then people I didn’t know, then the project grew from 10 people to 45 people. I spent a few years photographing people in the bathtub with there cloths on. Hoping to evolve the work and my experience of it, each time I photographed a person it was a different experienced depending on the relationship each one had with the water, a calmness or discomfort, fear, sensuality or anxiety. In the end I realized we are all dealing and struggling with something and I could photograph this project endlessly.

Lana Paiement is a professional freelance photographer and assistant and has been in the industry for over thirty years, her work has ranged from commercial, fashion, live performance, documentary, portraiture and fine art photography.

Lana was born in Toronto, Ontario, Canada and attended Ryerson Polytechnical Institute for still photography studies and went on to work as a custom darkroom technician, specializing in black and white archival printing and processing for nine years. She also volunteered for the Toronto district school board instructing youth on traditional and alternative photography techniques. Her work has been exhibited in group shows and solo shows throughout the Toronto and Hamilton area and has been published in various magazines and papers over the decades.

She won an emerging artist grant from the Ontario Arts Council, as well as a scholarship recipient at the New Brunswick College of Craft and Design. She is currently working on her next project and involved in a local movie shoot as their still photographer.

səbtəˈrānēən/
adjective: existing, occurring, or done under the earth surface.

The mass commuting underground world beneath the streets of Toronto have always been a source of fascination to me. So many people rushing about aimlessly like bees in a disturbed hive. No one pays attention to their surroundings or to each other. Socializing is nonexistent. Everyone seems to have more concern to their small electronic world connected to their cranial vaults, then to each other or their world around them. Even the sweet sounds of a violinist busking were lost to the masses.

As a photographer, I chose to capture this subject in the abstract. I created the illusion that they are all just part of their surroundings, nonexistent. I wanted to represent the speed of and detachment of my bee like commuters becoming one with their existence. I also realized that this had to be a totally immersive experience in both sound and vision. I went back and recorded hours of the sounds and noise of the subways environment to be part of my exhibition. Listen carefully to and hear the sweet sounds of the violinist playing.

Artist Bio:
Terrance R Pack was born and raised in Hamilton, Ontario and studied photography at the Dundas Valley School of Art. He prefers to be called a Generalist, however is primarily a documentary style photographer. He enjoys the world of back alley ways, old buildings and abandoned factories. His work has been compared to that of the Ash Can School of Art in New York City of the early 20th century.

Terrance also likes to journey into the world of the abstract and is very interested in what he refers to as “Lens Art”. He likes to manipulate line, color and composition in his photography. His work has been recognized internationally, over the past four years, in both the “International Color Awards”, and the” Black Spider Awards” in Los Angeles California. His work can be found in many private collections and in Galleries in Toronto Ontario.