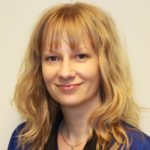 CHAIR OF THE BOARD

Charity Miskelly is the Vice Chair of the Board of Directors at Centre[3] and a Mortgage Specialist with the Royal Bank of Canada. Charity grew up in rural southwestern Ontario and now resides in Ancaster. Charity holds an Honours BFA and a postgraduate diploma in Arts Management, both from Western University. Charity also obtained Investment Funds in Canada certification through Canadian Securities Institution. Professionally, Charity provides home financing and credit advice at RBC.

Charity is on the board of Centre[3] “to contribute to the humble, meaningful, and significant contributions of an organization that is truly committed to the betterment of our society and community through a commitment to the arts. I am a huge supporter of the arts with strong belief in the power of the arts as a portal for understanding purpose, ourselves and each other, and as a driving force behind community action.” 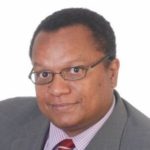 David Hosten was born in the United Kingdom and grew up in the Caribbean. David moved to Canada in 1985 and has been living in Hamilton since 2001. David previously worked in the financial and technology sectors, and is now a DARTS driver. David has exhibited his photography professionally in Ottawa and Hamilton. Previously, David was the founder and publishing editor of International Free Press (TIME magazine – NETWATCH – August 16, 1994). David is currently working on his next exhibition and working towards a publication of short stories.

“I have always loved the arts; my father was a painter and my grandmother a poet and lyricist. After spending years on other boards, the opportunity came where I could join Centre3 and I jumped at the opportunity to connect more with the arts in Hamilton.”

Steve is on the Board of Directors for Centre[3] “to be a part of an organization which collaborates and gives back to the community through social enterprise programs for youth.” 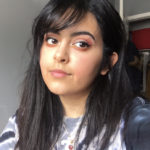 Teba Faisal was born in Baghdad, Iraq. Teba came to Canada in 2013 and lived in Mississauga until moving to Hamilton for university in 2017. Teba is an artist and illustrator, and is in their third year at McMaster University’s studio arts program.

“As an emerging artist and student, I’m invested in the art community and what it provides for other artists. Being on the board of an active art centre in the Hamilton community gives me the opportunity to voice the need for programs and workshops designed to enable other young and emerging artists.” 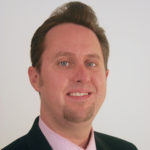 Grant Officer for the City of Mississauga

Andrew is currently working to improve alignment between the City of Mississauga’s strategic priorities laid out in the Future Directions Strategic Plans, approved by Council in 2019, and the grants programs which support these priorities. He is also working with community groups to better understand how the grant programs can support their work.

“I am on the Board of Centre [3] because of the impact they have in the community. I am proud to be part of an organization that is affecting people’s lives all over the City and beyond. From artists to members of the diverse communities which make up Hamilton, you can see the meaningful impact Centre [3] has and how it is improving the lives of the people it serves.” 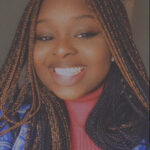 Barin Osho was born in Lagos, Nigeria. She moved to Canada in 2017 to further her education and has been living in Hamilton, Ontario ever since. Barin is an artist who aims at combining her faith, life experiences and reflections to represent her identity in her works. She is in her third year at McMaster University, pursuing a degree in studio art and philosophy.

“I joined the board of Centre [3] to be a voice for the creative youth and fellow emerging artists and students. Centre [3] provides me with the opportunity to establish connections with people who share a passion for guiding and supporting creative youths as well as reviving the creative spirit of Hamilton City .” 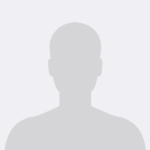 Brenda Ferguson has lived in the Hamilton area for most of their life. Brenda is the Chief Operating Officer for a not-for-profit charitable early learning organization that operates in Hamilton, Halton, and Haldimand Norfolk.

“My first degree is in music. Music and the arts have always played a pivotal role in my life. In the work we do with young children and families, the arts is a primary language for children. They communicate via the arts, making their thinking visible. With a fundamental belief that arts transform community, it is a privilege to be able to volunteer on the board of Centre [3] to support the visionary work they do in our community.”

Born and raised in Baltimore, Maryland, Melissa Murray-Mutch is a recent arrival from Union City, New Jersey (August 2018). Melissa spent her adult life and theatre training in New York City. Melissa is a professional actress and teaching artist.  She made her theatrical debut in Hamilton with the Canadian premiere of David Auburn’s play “Lost Lake” for the Hamilton Fringe Festival. She also performed in Light Echo Theatre’s inguaral production of Eve Ensler’s “Vagina Monologues” at the Staircase Theatre as well as Tony Vierra’s Plan B series also at the Staircase. In NY, she performed with the American Slavery Project’s “Unheard Voices,” Hudson Theatreworks, The Fire This Time Festival as well as the New Perspectives Theater. Off-Broadway: “Death of the Liberal Class” ( The New Ohio Theater), “Playboy of the West Indies”, and “Babes in Boyland”(Lincoln Center Theater), and in the regional theater production of  “This” by Melissa James Gibson at the Shaker Bridge Theater in New Hampshire. Film and T.V. credits include the short film “Hungry,” “The Coroner,” “Law and Order: SVU,” “Sabrina the Teenage Witch,” and “Sesame Street.” Melissa is a proud member of CAEA, ACTRA, AEA & SAGAFTRA.

Prior to the COVID-19 pandemic, Melissa was employed as a teaching artist for Theatre Aquarius, Young People’s Theatre of Toronto, Art Gallery of Hamilton Education, and as a Standardized Patient (actor) for McMaster University Centre for Simulation Based Learning.

“I was nominated to be on the board. Upon arrival in Hamilton, I was immediately smitten with the city and the art community. It’s so refreshing after leaving the Big Apple to be a part of a populace of artists who are accessible, unpretentious, and truly invested in serving the people of Hamilton through the arts. I am proud to be part of what I believe is one of the major driving forces for diversity and inclusion in Hamilton, Centre[3].” 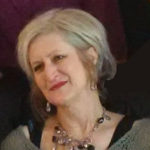 Originally from north Toronto, Colleen Reid has lived in Hamilton for the past 20 years. Colleen is a practicing architect who has taught at OCAD University (in Toronto) for 26 years, of which she was the Assistant Dean, Associate Dean or Acting Dean for 11 years. Colleen has taught in the Faculty of Design, focusing on the Environmental Design Program. Colleen’s architectural practice concentrates on administrative, community, multi-tenant residential, and school buildings for First Nations throughout Ontario. Additionally, Colleen practices art in painting and collage, and has completed an Art Thesis at McMaster University. Colleen’s important accomplishments include working on school feasibility studies for five First Nations bands, three in the far north of Ontario. One of these studies was for a Thunder Bay high school for First Nations, Dennis Franklin Cromarty High School, which includes a much needed live-in building supporting students from northern communities. Colleen is currently working on the administrative building and council chamber for the Saugeen First Nation on Lake Huron (under construction), and has just completed design and tendering for a community building for Wasauksing First Nation (Parry Sound). All buildings are designed to represent, support and respect their community’s rich cultural heritage.

Colleen is part of Centre[3]’s board “to provide support to the art community in Hamilton and to further develop interaction within the artist community.” 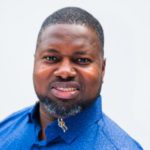 Richard Kobby Crabbe is originally from Accra, Ghana, on the west coast of Africa. He has lived in Hamilton for the past 12 years. Richard is a freelance photographer and videographer, as well as a child and youth worker / life skills coach. Achievements include freelance photography work for the City of Hamilton, the Afro Canada Caribbean Association of Hamilton (ACCA), and the Ghana Association of Hamilton. Richard is currently working on commercials and promos for several organizations.

“I joined the board to contribute in any positive way to the organization and to give back to the community. I also see it as a great opportunity to expand my intellect by learning from the rich experience of diverse members on the board. The arts, I believe, is an effective means of communicating with people from all walks of life…appreciatively.”