AND WE WON’T GIVE IT A NAME & STATIC ACTIVITY 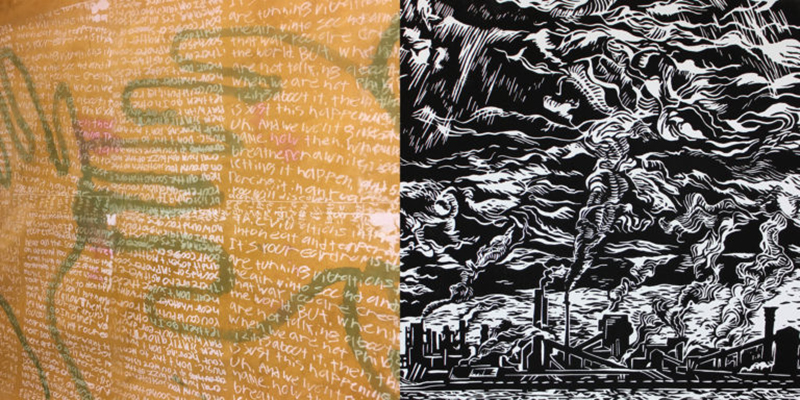 And We Won’t Give it a Name

With interests lying in many areas including dance, music, and art, Becky Katz has recently begun to barely scratch the surface of Existentialism through Eastern Philosophy, comprehended through the teachings of Alan Watts. Becky experienced her first existential crisis at a young age, [wondering] what on earth happens after you die?

Frustrated and exhausted by sporadic bouts of anxiety, stress, and fear, Katz was headed in the direction of a nervous breakdown. However, with a compulsion to survive, Katz introduced a new habit into her daily ritual: meditation. Though meditation had previously been an intimidating concept to her considering her brain was constantly racing with thoughts and doubts, she stumbled upon a guide, that not only made it possible, but made it necessary.

Is this a dream?

What is a dream?

How do you perceive reality?

Do you often experience anxiety?

Have you ever experienced a psychotic break?

Can you relinquish control of what happens?

Through what was thought to be a simple guided meditation, Becky’s life has recently transformed. Previously over analytical, Becky would often be consumed by worries, stress, and anxiety—sometimes resulting in panic. Fixated on these thoughts, her energies would be spent on unnecessary doubt and fear. Through the words, wisdom, and voice of Alan Watts—defining Eastern philosophy in layman’s terms—Katz has newfound solace in, uh, and We Won’t Give it A Name.

And We Won’t Give it a Name is a mixed media psychedelic exploration of [non] conceptions about Reality and Existence through different methods of providing data for our perceptions–our senses.

What makes us human? What we know of reality is how each of us perceive it: through seeing, feeling, tasting, smelling, and hearing. All of which both happen to us, but that we also do—voluntary and involuntary; a double bind; a human phenomenon. But why define it? What? Uh, And we won’t give it a name.

Let’s see what you’re gonna do.

How do you free up energy?

We have a lot to not think about.

Though we exist in states of complicated multiplicity, we cannot quite define it… can’t put our fingers on it. Why? Because it is the Void!! but no, we won’t give it a name.

Between the all and the void, is only a difference of name.

-The Secret of the Golden Flower

It’s your eyes that are turning the sun into light

It’s your eardrums that are turning vibrations in the air into sound and in that way you are creating the world.

And we wont give it a name.

“To See there’s this lens in your eye which more or less works the same way as a video camera. This lens is in the back of your eye and it sees the outside world upside down.

The brain flips it for us through a concave lens.

The fact that we are standing on the ground,

our feet are on the ground, but the image that our eye actually sees is flipped.

Everything is as it is.

Beyond the lens there’s these things called rods and cones, and their responsive to different colours and brightnesses and depths of colours. And the image that you’re seeing of the worlds comes in and hits these rods and cones and activates certain ones based on the colours and shapes of your external reality, and these rods and cones are connected to the neural system and they send a really specific pattern of electrical impulses up the optic nerve which travel to the primary visual cortex in the brain. WHOA

And there’s other specialized areas in the brain, sort of… adjacent to the primary vision centre, and they help us make sense out of the things that we are “seeing” like… there are areas that can interpret shapes and hard lines and there’s another area dedicated to three dimensional perception, and how we can understand depth in our environment. You know you really should be talking to a neuroscientist about this…”

Becky Katz, 33, is a Hamilton-born multi-disciplinary artist whose “primary” artistic focus is in printmaking—which she studied at McMaster School of Art from 2004-2008, although she dabbles in a lot, and is involved in several different creative projects and community-based programming, including (but not limited to) Centre[3], Strangewaves, Sourpussy, Ca$ino, glassEYElashes, SqWhere, among other creative outlets.

This collection of lino-cut prints represents my ongoing fascination with using positive and negative space to generate images that are both static and active. When I’m carving into a lino block, the motion and rhythm of the gouge lead me to the lines and shapes that will create a still image—an image which carries the echo of the force and activity that was necessary for its creation. The movement and physicality of carving into the lino block feel especially appropriate when the print rendered is of Hamilton’s heavy industry.

Much of my other art work is done in watercolour. Lino cut print making gives me the freedom to think and create in an entirely different way than painting. The constraints of the medium are oddly liberating. Thinking about an image in black and white, and in reverse, rather than in layers upon layers of colour provides a novel challenge. All of these lino-cuts include an aspect of sky, and many of them also include open water—which upon reflection seems to be an inadvertent manifestation of that feeling of possibility and excitement that I associate with relief print making. A chief influence for me in print making is the work of the German Expressionists, in particular Karl Schmidt-Rottluff and Erich Heckel. Stylized representation and the dramatic use of line are elements that I seek to include in my own printmaking.

Stephanie Sikma is a visual artist and life-long Hamiltonian whose two favourite ways to produce art are relief printmaking and watercolour painting. Her other gigs include teaching English Literature and raising three indescribably lovely children with her cherished husband, Doug.

After earning an honours degree in Fine Art and English at McMaster University, where she also completed an M.A in English, Stephanie attended Sheridan College and acquired a post-graduate certificate in Illustration. www.stephaniesikma.com

AND WE WON’T GIVE IT A NAME & STATIC ACTIVITY has been generously supported by: