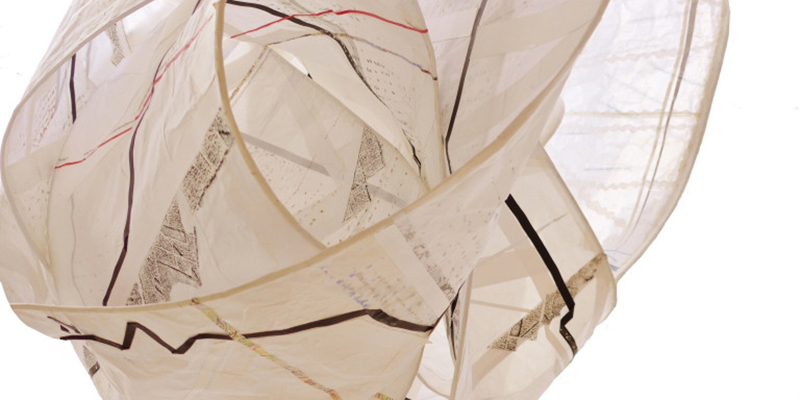 My pieces are constructed of paper, a material I like to use for its translucency and for its denial of permanence, of mass and of weight – supporting aspects of transience and change.

The translucency of paper allows for a layering on several levels, similar to a layering of identity that stems from being part of multiple communities. I expand on this idea by working with the surface, preferring the intimacy of physically rather than digitally manipulating my imagery, folding and crinkling the paper, adding maps, and script and printed images to the surface, making it into a carrier of messages.

I like to use maps as tools and as a language and my work often resembles pictographs of connections and conflicts. Increasingly I make use of ‘Schriftbilder’ (script images) as a weave of script or script-like patterns. Mirroring both communication and record keeping, these patterns, and texts, also point at history and the transience of time. I am thus refining my work to reflect my human and environmental engagement as well as my grave concern.

TRAVEL-LOGUEis a personal road map incorporated in an endless Mobius Loop wound up into a ball shape. Coloured crosslines function as time markers and fleeting strips of memory. A discrete conversation is taking place on narrow bands of text about the perception of geography and of our cities, about the passage of time or its repetition and of life’s ‘could have been’.

MAPPA MUNDIreflects several lines of thought and with contrasts. The long band folded in a rhythmic Leporello works its way from white imagery to black, from the pristine untouched to annihilation of our world. The striking pictures are hiding gruesome messages of our species ability and obsession for destruction. It is also a waveform, a pulse taking, illustrating historical development.

HOPE REVISITEDis a Mobius Loop wound into a ball shape – a whole world forming or, maybe, reforming itself. There are traces and markings, perhaps of communication whose script we cannot decipher.

Taken together these three pieces reflect a mental and environmental stocktaking, a mirror of anxieties and hopes that is underscored by a Sound Environment.