The pandemic has altered and affected us all, some more devastatingly than others. For me stuck in my bubble I began something unfamiliar which seemed quite apt for the times. The covid drawings project was built on a simple notion of a single-minded process to complete one drawing on 8.5”x 11” card stock every day for a year.  I began this journey during the February 2021 lockdown.  These drawings are unconscious reflections of the times, non-representational subjective responses to the process through the genre of traditional modeled graphite drawings.  These drawings constitute a strange amalgam of references, a laboratory of images, thoughts, patterns, and creative solutions based on personal interpretations of shape and form.  To me they are two dimensional sculptural forms manipulated in a defined space though the tonality of their form. They are daily insights into how I solved the spatial problems of two dimensionality, a collection of choices made to give rise to more interesting and engaging images.

The production of the covid drawings posed challenges both emotionally and logistically, with the unanticipated burden associated with committing to a yearlong endeavor being one of the biggest surprises.  For me this was a project that uncovered the feelings of excitement that came with starting a new project, making it through the doldrums of the middle section and the joy of reaching the end.

An unconsciously created recurrent theme within most of the drawings were the blank untouched simple shapes encapsulated by shaded complex organic forms of non-representational references.  These distinct shapes and forms created a recurring structure to the drawings and for me came to represent moments of untouched purity and hope.

This is an exhibition of a few selected drawings that look at my intimate daily response to the socially isolating experience in which the pandemic placed me. 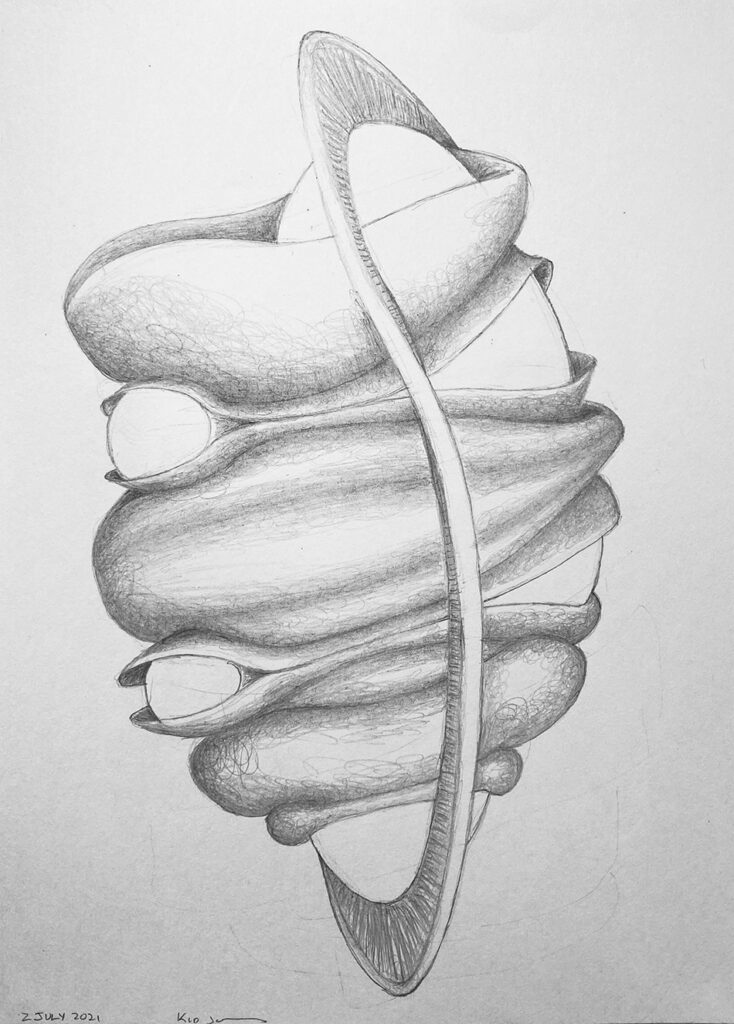 “My art is the balance of two worlds. The initial world is one of geometry, intellect and order bound by strong craftsmanship.  The other world is soft, organic, sensitive and instinctive.  These two worlds combined are the foundation of my art, the result of which is the starting point of the viewer’s imagination. Geometry is often thought of as dry but I try to reveal its softer side in my paintings. Fluid geometrical forms can have a lyrical playful appearance depending on their scale, colour, placement and relationship to the background. Some forms ascend or descend while others merge giving a feeling of transition.”

Leszek Wyczolkowski was born into a family of artists in Poland. He received his first artistic training at an early age from his father. His formal education was obtained at the Academy of Fine Arts in Warsaw – Poland. After immigrating to Canada Leszek Wyczolkowski continued his education at the Ontario College of Art and Design University (1980-1982 and graduated with honours). In 2005 and 2007 Wyczolkowski attended self-directed residencies at The Banff Centre, Banff Alberta. He has traveled through Asia and Europe and has exhibited in over one hundred and eighty one-man and group shows in Austria, Belgium, Canada, France, Great Britain, Greece, Italy, Japan, Malaysia, the Netherlands, Poland, Sweden and the United States. Leszek Wyczolkowski’s works appear in museums, corporate, public and private collections around the world.