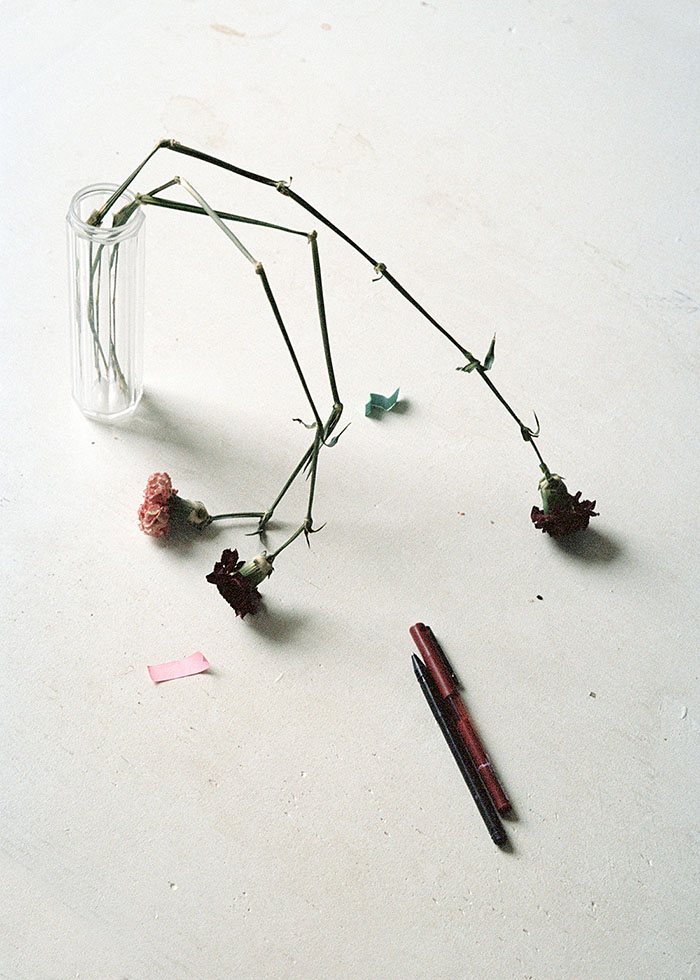 Centre3 is pleased to present Love S.O.S., a new installation by Toronto-based artist and photographer Steven Beckly. Over the past 8 years, Beckly has produced hundreds of images. Cultivating moments of closeness and intimacy, he approaches photography as both a personal and a social practice, an act that connects rather than distances, feels rather than explains.

In Love S.O.S., Beckly’s images are assembled in a slideshow of almost 400 photographs. A multiplicity of encounters, they form a spectrum of interactions shaped by the artist’s desire for connection with his surrounding world. Accompanying Beckly’s slideshow is an evocative soundtrack of love songs, featuring tracks by Leonard Cohen, Daft Punk and Tina Turner. Selected for their varied perspectives on love, these voices reflect on matters of the heart against Beckly’s shifting imagery. In one corner of the gallery, visitors are invited to leave their suggestions for love songs, adding to the project’s growing playlist. Continuous and mutable, Beckly’s project frames intimacy as an endless and interrelated process of transformation. Set against a contemporary world undergoing dramatic change, Love S.O.S. operates as an emergency call to reconsider the poetic and political dimensions of intimacy.

Steven Beckly received his MFA from the University of Guelph. Recent solo exhibitions include Meirenyu at Daniel Faria Gallery (Toronto) and A tender touch can bend the straightest of things at Eastern Edge Gallery (St. John’s). Beckly has also produced public art installations for CONTACT Photography Festival and the City of Toronto’s Jack Layton Ferry Terminal. He is represented by Daniel Faria Gallery in Toronto.

Sally Frater is an independent curator who holds a BA in Studio Art from the University of Guelph and an MA in Contemporary Art from The University of Manchester/Sotheby’s Institute of Art. In her practice she is interested in exploring issues of spatial theory, memory, the archive, and photography.

Steven Beckly’s largely photo-based practice probes the terrain of site and intimacy. Exhibited in forms that include book-works, traditional gallery exhibitions, and public art installations, his images blur the boundaries between public and private, leading us to reflect more deeply on the conditions under which we undergo experiences of “close- ness.” Beckly draws attention to the ways we both align ourselves with, or separate ourselves from, constructed and natural space through explorations of instances of physical and emotional connection.

The artist’s latest work Love S.OS. emerges from a similar set of formal and conceptual concerns. Taking the form of a digital slide show that is accompanied by a musical track of 29 love songs, the visual component of the installation is comprised of photographs that the artist has made throughout his career. Many of the pictures are of nature in different states and seasons: the sun streaming through the branches of a lush, green treescape, close-ups of plants that highlight compositional detail of leaves, a wilted daisy on a tiled floor, the delicate scattering of frost on a window pane, an orange ladybug on a faded plank of stained red wood, and layers of dead butterflies stacked in a bowl. In other images we see people: a bare-chested man lying amongst tall dry, grass, a smiling figure whose chin is lovingly cupped by a smaller hand, a baby who peers directly into the camera over the shoulder of the person who holds them, and the touching knees of people who are squatting opposite of each other. The images contain subtle shifts; they move from exterior to interior settings, to views that are solely of nature, to those that feature humans in nature, to those of humans in interior settings with plants, to those of humans in settings that only feature fabricated elements though all reinforce some sort of engagement with the senses. Many of the pictures have a quietude emanating from them though there are also images that feature scenes of the interior of nightclubs that pulsate with a very different type of energy. Whatever the content of the images, and regardless of the time of day during which they were taken, light is a constant that threads them all together.

Light plays a critical role within the process of photography. Not only does it illuminate the subject of a work in manual photography, it passes through the aperture of the camera lens, exposing an image to be burned onto lm. Although there are references to earlier forms of photography within the installation (namely through the trope of the slideshow itself), it is unlikely that Beckly is accentuating light to solely reference the means of photographic production. Throughout the images light is employed as a source that reveals, warms, and energizes. Light is de- ployed as a property that foregrounds the affection the artist has for his subjects; for the people who appear in them are his family, friends, and partner as well as communities that he counts himself a member of and places that he cherishes. In choosing to make each person, space, plant, and animal the subject, Beckly is stating that they are worthy of viewers’ attention. In documenting them, the artist has incorporated them into the archive of his own personal experience. Bathed in light, he bestows each with tenderness and recognition of being seen.

Those depicted in Love S.O.S. are currently under siege. We see pictures of nature. We see pictures of racialized bodies. We see images of queer men and spaces that have been rendered queer by virtue of their presence within them. All of the aforementioned have historically been subjected to multiple forms of violence, but it seems as though the attacks on various marginalized communities have increased tenfold and the circulation of media reports on these brutalities is unrelenting. As an antidote to this predicament, Beckly seems to be suggesting that we find solace in community, friendship, nature, and both familial and romantic love.

In the event that we might miss what the artist is intimating through his imagery, he has arranged an entire soundtrack that underlines this. The collection of songs, which all have love in the title, have been selected by the artist, and visitors to the exhibition are invited to make suggestions which might eventually be added to the soundtrack, another element that gives further credence to the artist’s belief in the power of the collective. The joyous nature of the tracks in question transform the exhibition space into a veritable dance club. Beckly reminds us that we can survive the harshness that life brings to us through love, and the bonds that we form with each other and the world around us make us resilient; that we can dance our resistance. At this particular moment, deep in the moment of what seems to be unabating harshness, I think that we need to hear this.

Our 173 James North location is partially physically accessible. We have a level entrance leading to our shop, information desk, galleries, washroom and traditional print studio. Unfortunately, we do not have automatic doors or an elevator. Our silkscreen studios and digital lab are only accessible by stairs. We are working toward becoming a physically accessible space in the future.

Presented with generous support from the Canada Council for the Arts.